MY NIGHT WITH REG 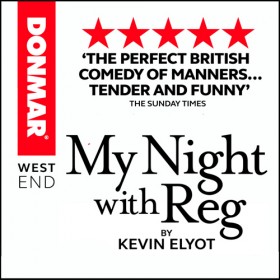 ★★★★★ ‘British drama doesn’t get better than this’
Evening Standard

★★★★ ‘The funniest play to be found in London… Unmissable’
Daily Telegraph

Following its critically-acclaimed sell-out season at the Donmar Warehouse, Kevin Elyot’s classic comedy transfers to the Apollo Theatre for 11 weeks only.

At Guy’s London flat, old friends and new gather to party through the night. This is the summer of 1985, and for Guy and his circle the world is about to change forever. Deliciously funny and bittersweet, My Night with Reg perfectly captures the fragility of friendship, happiness and life itself.