By The Goodale Brothers 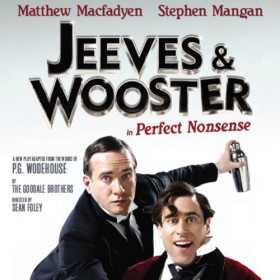 When a country house weekend takes a turn for the worse, Bertie Wooster is unwittingly called on to play matchmaker, but also to steal a silver cow creamer from Totleigh Towers. Naturally, the ever dependable Jeeves is there to prevent Bertie from making a fool of himself in front of a cast of Wodehouse¹s finest characters.

Jeeves & Wooster in Perfect Nonsense opened in the West End in 2013 with Matthew Macfadyen and Stephen Mangan in the leading roles, followed by Robert Webb and Mark Heap, and finally John Gordon Sinclair and James Lance who continue until the production closes in September 2014. Jeeves & Wooster will then begin an extensive UK tour.

★★★★★ ‘An evening full of invention, wit and brilliant characterisation’
Whatsonstage.com

★★★★ ‘P.G. Wodehouse would have loved this production‘
Daily Telegraph