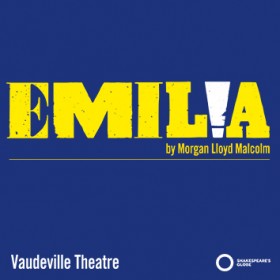 DUSTY
WITNESS FOR THE PROSECUTION

1609
I AM EMILIA.
Writer. Wife. Lover. Mother. Muse.
I am unheard.
I want education, equality, opportunity, respect. For us all.
We want choice.
We want a voice.

2019
WE ARE EMILIA.
400 years ago Emilia Bassano wanted her voice to be heard. It wasn’t. Her story is still our story.

Emilia and her sisters reach out to us across the centuries with passion, fury, laughter and song. Listen to them. Let them inspire and unite us.

Times are finally changing. Not fast enough. It’s up to you. We are all Emilia.

Stand up alongside her and be counted.

★★★★ ‘Told with verve and energy… a stirring show’
Metro

★★★★ ‘The company deliver the story with energy and commitment, singing, dancing and acting up a storm’
Daily Express