By Stewart Lee
With Miles Jupp and Simon Munnery 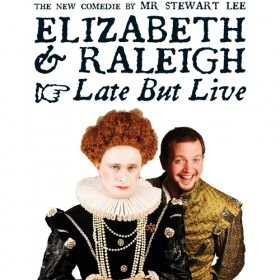 ★★★★ “Playing Raleigh with panache, wit and throwaway fun is Miles Jupp, whose perfect foil, Queen Elizabeth I, is played imperiously by Simon Munnery. The pairing of these two great comedians is like nothing else at the Fringe, and for those lucky enough to have seen Johnson and Boswell: Late but Live last year, expect more of the same weirdly madcap humour. Penned by Stewart Lee, the jokes in the show are the kind that produce great bubbles of joyous, unexpected laughter. A strong sense of the historical is mixed in with the best kind of modern silliness, and the heightened language only adds to the excellence of the base humour. This is the Fringe at its best, and those who witness Raleigh’s culinary humiliation are likely to agree.” Glasgow Herald